Was the Mangeur de Cigogne SEO Competition really 15 years ago this week?

I went from all working all hours in all weathers in the construction industry to sitting here in my nice warm office looking out of the window, cup of tea in hand, writing silly littlr blog articles and generally loafing around on the Internet 🙂

After the Mangeur de Cigogne ended I spent a number of years doing affiliate work, made a killing on AdSense and started running a Free Business Directory for UK businesses.

As you can see my website deigns haven’t improved much since the early Sim64 days but the directory earns enough so I don’t have to worry about working again.

To participate positioning and referencing.

– Optimize a web page for the query Mangeur de Cigogne
– Declare your participation and the URL of your page on the mailing-list contest before 15 April 2004.

Are there other rules?
No, no 🙂 Clearly, anything goes!

Everyone will deploy his talents and SEO knowledge of the way that it deems appropriate. The competition is open to both pros and amateurs. Participation is individual, but you can if you want to represent a company.

The sole arbiter of the contest will be Google will decide which participants of the position that they will get in its results pages.

The winner, and thus better SEO of France and of the universe, will be one of us who will get the better position in Google.

The results will be assessed and made public at the June 15, 2004, two months after the registration deadline.

Good luck and have fun!

Sim64 (TJ) was one of the few English entries and despite the language barrier made some good friends.

My memory is a little rusty but I seem to remember the finishing order was; 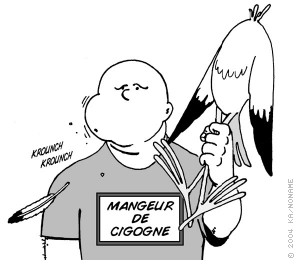 The others I remember;

apologies to anyone I have missed.

How do I remember the day so well? I missed the last few hours because I was in the maternity ward holding my wifes hand as little TJ was born

Hope all competitors are well and still doing battles with Google ;o)